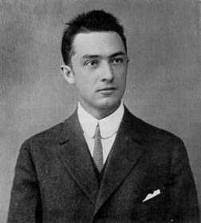 My first published article was on WCW. A paper I wrote during the first quarter of Graduate School on the same poet (a different paper) argued that his poems were rhetorical speech acts of a certain urgency. I contrasted some poems with a fairly hectoring, didactic tone, ("Let me tell you, my townsfolk, how to do things right") with the implicit rhetoric of the poem "The Jungle." I was contesting the standard view that Williams just presented static, motionless visual images, a view that I had never agreed with even when I was 14-years old. It bugged the hell out of me that people read Williams in the Selected Poems rather than in the Collected.

I could still write this paper now. I remember the main points and even some of the bibliography I used. I remember going to the library and looking in the rare book room at the original periodical publication of "The Jungle." It was different! I felt like a a real scholar, knowing the poem had variants.

I think this paper might have been actually better than the one I published, which was written a year later.

[This pretty much duplicates another post I wrote a while back. Oh well.]