I was inspired by some of Lydia Davis's writing to start a series called "Jonathan at 50." It won't really be similar to her work in any way that's super obvious, but it will have some of the deliberate blandness and descriptive objectivity of some of her stories. As I was reading her stories I just started to think of phrases I would use; whole sections started to write themselves in my head.

Each segment will address some particular aspect of my life and habits. It should be quite dull. I am a dull guy after all.

I am not yet 50. Not even close. I am more than two months away from that milestone, but I thought I'd start now.

My post about bebop having a sour sound got a lot of nice feedback. Tom Clark liked it: he hears bop as "sweet and sour."

I also think that Lydia Davis's prose has a pale violet color.
Posted by Jonathan at 3:30 a. m. No hay comentarios:

I'm going to try to be a little more systematic about posting here; maybe move to a one post a day schedule and write posts in advance so one would appear every morning as if by magic, as on "Stupid Motivational Tricks."
Posted by Jonathan at 8:04 a. m. 2 comentarios:

I never liked the idea of a "symptom" very much (in cultural studies). In the first place, symptom implies disease, something wrong, so a poem, a story, a song, or a dance being "symptomatic" of some larger phenomenon implies that it's like a rash that is a symptom of an infection. Something is wrong and the painting or building or motet is a sign of that. Secondly, the larger, seemingly more significant phenomenon the symptom is a symptom of is going to be something less interesting than the drawing or movie or cantata. The idea of the symptom, however, reduces the novel or play or fugue to a secondary status.

Make two piles, in one put the human condition, getting along better together, what makes us truly human, what it means to be American, learning about other cultures...

Which pile would you choose? In other words, can you only justify the second pile by using the vague humanist rhetoric of the first? Isn't it, rather that we want to have the pile of actual works and feel the need to use some kind of mealy-mouthed rhetoric to justify our interest in them?
Posted by Jonathan at 2:51 p. m. 2 comentarios:

Tomorrow I'll see how bad the damage really is. I'm not looking forward to it.
Posted by Jonathan at 9:39 p. m. No hay comentarios: 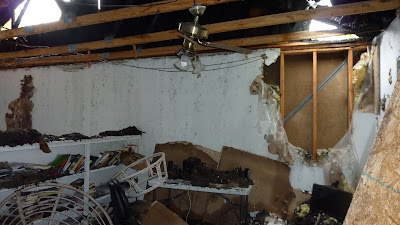 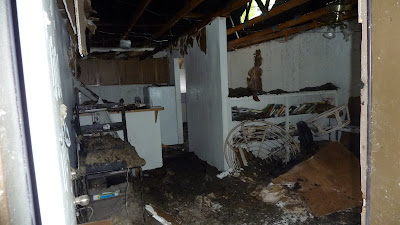 The damage was extensive.
Posted by Jonathan at 2:47 p. m. 7 comentarios:

My apartment burned last night. I was in St. Louis in my house--270 miles away. I guess that's good because I could have been injured or worse. I was awakened today by the fire department. When they asked for me by name and identified themselves as the Lawrence fire department, I knew right away what it was.
Posted by Jonathan at 9:09 a. m. 5 comentarios:

I have some very successful students graduating this year, Earl, who was in my jazz course and Ben from my Spanish course. I can take no credit for their success, since I had them in their final semester of their senior year and they were already very accomplished when I met them. I can take a good deal of pride in their success, though, on behalf of the Spanish department and the Honors program.
Posted by Jonathan at 12:57 p. m. No hay comentarios:

Here are some papers my students came up with:

One wrote a series of songs, with words and music, in various of the styles we had been studying, recorded them and turned in a 10-page explanatory paper to boot. He got the highest grade.

Another interviewed native informants to see what traditional proverbs they knew and wrote a very interesting paper.

A third wrote about the Cuban décima, contrasting oral and written styles of the genre and making some good observations about gender.

Another dedicated her paper to the cultural resilience of Sephardic Jews, using examples taken from traditional proverbs.


Those were the four best, and there were a few more just below this level, with good ideas but not as clean an execution.
Posted by Jonathan at 3:20 p. m. No hay comentarios:

There's something in the sonority of bebop and early hard bop / cool recordings that particularly appeals to me. It's a kind of sour taste. I can't really identify its source: maybe the recording technology itself or the calfskin drumheads. I hear this most with Art Blakey; the recordings with Monk for Blue Note; some Miles Davis nightclub recordings from 1951 with Blakey on drums, where the recording quality is rather poor, but his bass drum feels like a punch to the stomach. The bebop slang for this kind of bass-drum hit was a "bomb."

Blakey tunes his drums lower than most of his contemporaries, and his famous for a particular kind of press-roll with crescendo.
Posted by Jonathan at 9:21 a. m. No hay comentarios: