I've owned this book for years but never read it--I know because the pages were uncut. I had underestimated this poet from the Canary Islands, thinking him a kind of minor epigone of Valente. I was clearly wrong about that.

The 9000 book project requires an enormous receptivity. That's probably the quality that I most strive for as a reader of poetry. Receptivity means allowing oneself to be overwhelmed by beauty without trusting too much in one's own prejudices. It's difficult because the prejudices are like a suit of armor, a protective but rather clumsy form of protection--against what? My suit of armor might be very useful in a medieval joust, but really how often am I in a medieval joust?

Here is a magnificent edition of a book originally published in 1987, with a brilliant epilogue by Julián Jiménez Heffernan.
Posted by Jonathan at 10:38 a. m. No hay comentarios:


I thought I had included this in the series but apparently. Roca is one of the best contemporary Colombian poets, first recommended to me by the Spanish poet Jorge Riechmann. Roca's poems are very memorable: I found that I remembered quite a few from the last time I read this book.

The idea of Pessoa's five funerals is that his heterónimos will be buried with him.
Posted by Jonathan at 4:15 p. m. No hay comentarios:

Labels: 9000 books of poetry, third percent
The project is coming together nicely. I have kept tinkering with the chapters and their order until I got things right, with no repetition of content between chapters, and sufficient uniqueness to both each individual chapter and to the book as a whole. It starts off with an introduction mostly on intellectual history, then the chapter on Zambrano and Valente. Chapter 3 is on Lorca's duende. I've just gotten an invitation to send this article to a special issue of a journal. Chapter 4 is on Lorca vs. Jiménez as influences on contemporary Spanish poetry. Chapter 4 is something I've already written on Gamoneda. And chapter 6 expands the field to include Latin American poetry. That's it. There are five main chapters left to be written. At least two or three will be done before the end of 2010, if all goes well.
Posted by Jonathan at 1:37 p. m. No hay comentarios:

Ildefonso gave this to me in Madrid. It is a book of large cards with poems on one side and paintings by Francisco Suárez on the other.
Posted by Jonathan at 2:20 p. m. 1 comentario:

I love this book. It's one continuous poem broken up into one page fragments, with a remarkable consistency of tone:

Yo he de llevar la lengua a la palabra.
Posted by Jonathan at 1:47 p. m. No hay comentarios:

A selection of Milán's earlier work. There are some very good poems from books I haven't yet read in their entirety. I'm almost getting to understand what his work is all about.
Posted by Jonathan at 7:39 p. m. No hay comentarios:

This is an amazing book by Canarian painter and poet Padorno. A visionary consciousness of an island poet. I'd read Edenia before, a later book, and not been quite as impressed. There are some direct reference to Lezama Lima--a favorite of many poets from the Canary Islands.
Posted by Jonathan at 12:20 p. m. No hay comentarios:

Found some good Kerouac readings on the itunes store; purchased them and loaded them on my secondary ipod--the other is synched to my home laptop. This should go over well today in the jazz class.
Posted by Jonathan at 2:39 p. m. No hay comentarios:

There was always something unsatisfactory about MIlán's poetry for me, but the more I read the more I'm able to selectively filter that out. I think it was that the poems never ended how I wanted them to; I couldn't quite understand their structure. Now, I'm thinking I was wrong. Or maybe it's that he writes a lot of poems and I was suspicious of that. I couldn't figure out which ones were meant to be the best ones.

Anyway, this is one of his best books. You have to love the title too: "An action that at one time I thought was [an action] of grace."
Posted by Jonathan at 5:43 p. m. No hay comentarios:

Here is Milán at his most expansive and optimistic.

Here we see Milán develop his more stream-of-consciousness, almost rambling style. The word play still is here, but it's at the service of an exploration of his own ideas.
Posted by Jonathan at 1:47 p. m. No hay comentarios:

A selection of Milán's earlier poetry, with a strong Octavio Paz influence at the beginning. A lot of word play.
Posted by Jonathan at 12:52 p. m. No hay comentarios:

This is a short, unitary, and beautiful book by Uruguayan poet Milán. There's a little less of the self-consciousness about writing that makes Milán's poetry so distinctive. I'm kind of lucky to be reading it because there are only 100 copies and my library happens to have it.
Posted by Jonathan at 12:41 p. m. No hay comentarios:

I have to remind myself constantly that high modernism is the canon and thus my sense of it as embattled is somewhat deceptive.

In other words, Paz, Lezama Lima, Valente, etc... occupy a prestigious place in literary culture. Or Wallace Stevens, say, to give an English-language example. Now the problem is that in the contemporary university, cultural studies has largely displaced that canon, especially in Latin American studies--but also to some degree in the peninsular (Iberian peninsular, that is) realm. The typical argument in Latin American studies would have a very clear political "take away." I heard a colleague of mine at a candidate's job talk the other day suggest that any emphasis on literature as an aesthetic phenomenon would automatically alienate students, have them view literature as something alien to their own lives--as though their own lives had no aesthetic component at all.

So yes, I work on the boring old canonical stuff, leaving me holding the conservative end of the stick. I believe, though, that reading this stuff--really difficult modernist poetry--makes you frightfully intelligent. It really just uses all of your brain at the highest level of literacy imaginable. To really get this kind of poetry, you have to have a highly developed cultural, musical, visual, verbal, problem-solving, connection-making intelligence. But the only way to get that is to read it. In other words, nobody has it before approaching this kind of poetry.
Posted by Jonathan at 9:10 a. m. 2 comentarios:

I'm interested in the concept of "ida y vuelta" or "round trip." For example, Lorca writes gypsy ballads, and gypsies in turn convert these into popular songs. Or Julio Cortázar writes a story in Spanish about Charlie Parker ("The Pursuer"), and Paul Blackburn translates it "back" into the American vernacular. Ida y vuelta is a translation or any other type of cultural interchange in two directions, not a single one. Can you think of any other examples?
Posted by Jonathan at 11:29 a. m. No hay comentarios:

There's an interesting give and take between vocal and instrumental jazz, beginning with Armstrong who was both the first great recorded jazz singer per se and the greatest soloist of the earliest period of recorded jazz. Really great horn players listen to singers and often model themselves after vocal stylings. (I've heard classical wind and brass players say the same thing so this isn't limited to jazz.) You can hear this in Lester Young, who admired Billie Holiday and Sinatra; in Miles Davis, who often interpreted songs sung by these same singers. The singers also provide a connection to the songs themselves.

By the same token a singer can model his or her stylings on horn players.

A playlist based on this concept might begin with the following:

Armstrong playing and singing "Body and Soul"
Sinatra and MIles playing their separate versions of Rodgers and Hart's "It Never Entered my Mind."
Sinatra and Lester Young playing their separate versions of "Taking a chance on Love."
Lester Young accompanying Billie Holiday on the collection "A Musical Romance" (various songs)
John Coltrane playing with singer Johnny Hartman on "My One and Only Love."
Vocalese versions of "Moody's Mood for Love." An improvised jazz solo by James Moody on the tune "I'm in the Mood for Love" later set to words.

When swing style pop vocals like those of Tony Bennett became eclipsed by rock music in the mid 1960s, it freed Bennett up to be a jazzier singer. The same happened with Rosemarie Clooney--a pop star in the 1950s but a jazz artist later in life. Interestingly, rock musicians popular in the 1970s like Linda Rondstat and Rod Stewart, Joni Mitchell, also turned to the great songs of the great American songbooks much later in their careers--with varying results, some good, some bad.

Nat Cole began as a jazz pianist. When he began singing that talent eclipsed his piano playing and he became an international pop star. His brother, Freddie Cole, has had an interesting career as a jazz singer, using a Nat King Cole-like voice but a more jazzy, less pop feel. Even Armstrong did pop vocals in his later career that have little to do (seemingly) with his jazz roots: "It's a Wonderful World" and "Hello Dolly."

Vocal music, then, has always been close to the commercial side of jazz, often to the point of not being jazz anymore. To what point the dichotomy between jazz singing and popular music is valid, I don't know. Is Sinatra singing jazz with Count Basie and pop with Nelson Riddle? For me, Sinatra is a jazz artist. He even tried to hire Billy Strayhorn away from Duke at one point...
Posted by Jonathan at 6:50 p. m. 1 comentario:

More's been going on at Bemsha 2,Writing Jazz my jazz course blog, and at my course blog for tradiciones oralesthe romancero course, and of course at Stupid motivational tricks. I'm hoping to resume my 9,000 books of poetry series soon. Facebook also detracts from the blog, because shorter things tend to be posted there. If I've rejected your facebook friend invitation and you are actually a reader of the blog, let me know that. I tend to not be "friends" with anyone whose name I don't recognize. Just a little quirk of mine.
Posted by Jonathan at 10:14 a. m. 2 comentarios:

All-state band photo. Julia is the short girl trumpet player next to the guy in the white uniform toward the left of the trumpet section. 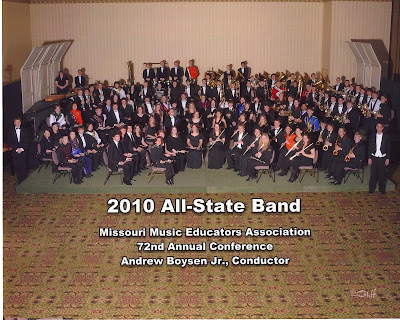