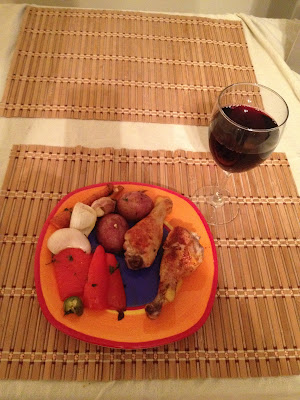 Chicken with paprika, oven roasted vegetables (red potatoes, garlic, onions, jalapeños, carrots, red bell peppers, parsley, olive oil), red wine. On a plate I got for my birthday, bamboo placemat.
I simply cut the vegetables to the size you see here, drizzled with olive oil, stuck in a lasagna pan in a 350 degree oven for 50 minutes. The chicken, I simply coated with paprika and based for an hour. Strangely enough, I didn't need to add salt to either dish in this meal.
The garlic was just half a head of garlic that I didn't even both to chop. Garlic roasted in its skin like this is very creamy in texture and mild tasting. Between the garlic, the jalapeños, the onions, and the parsley, and the paprika, the food was quite flavorful unsalted. The natural flavors of the food shone forth: sweetness of the carrot and onion. I was particularly proud of the balance of flavors,colors, and nutritional elements.
Of course, I made twice as much food as you see here on the plate. I will eat the rest for dinner tonight. Not bad for about 10 minutes of preparation.
Posted by Jonathan at 11:41 a. m. 1 comentario:

The first section of Libro del frío, a major long poem by Antonio Gamoneda, bears the Virgilian title "Geórgicas." It consists of 11 short sections, each consisting of 2-3 paragraphs of poeetic prose. Georgics comes from a Greek word meaning "farming," and the poem is a kind of anti-pastoral: "this house was dedicated to farming and death." "I saw serenity in the eyes of the cattle destined for industrial knives." Industry, or modernity itself, is off-stage, but the rural world is in decay.
The most characteristic rhetorical trope is syntactic parallelism. The most salient phrasing is noun + past particle + prepositional phrase: "Esta casa estuvo dedicada a la labranza y la muerte" / "las maderas atormentadas por la lluvia" [wood tormented by rain] This pattern appears in virtually every section of this first section of the poem. [As I write this entry, I hear Gamoneda come on randomly on my ipod! He is reading a different poem, but one with almost identical structure. The noun + participle + prepositional phrase pattern appears several times.]
The most common verbs are those of perception or cognition in first-person singular: I heard / I saw / I remember, or the existential there is / there are. There are also verbs of motion: rising and falling. Very few other human agents appear aside from the 1st person speaker, who adopts a grave, prophetic voice. The only one I notice is a "neighbor woman" who "washes the funereal clothes." The result is a kind of ghostly world, in which the speaker has no other close human companions.
Semantic elements recur from section to section. Rain and lightning. Dampness. Farms animals or stables. A flock of sheep. Images of rot or decay. Shadows. Tears, lamentation, or weeping. The repetition of nearly identical phrases or images undercuts the independence of each section, creating a kind of plotless narrative. In other words, each section seems to recount an anecdote, but the evocative lyrical repetitions overshadow any kind of narrative coherence. Is this the same narrative told in 11 different ways? Or 11 stages of the same story? We could easily imagine a more straightforward prose narrative treatment of each anecdote. One phrase from the poem gave rise, possibly, to the title of Gamoneda's memoir.
The next section will be "El vigilante de la nieve," in which the narrative elements become stronger, and the 1st person gives way to the third.
I wrote this entry in 25 minutes, giving myself a kind of "test" on the poem, which I recently memorized.
Posted by Jonathan at 10:34 a. m. No hay comentarios:

I decided to listen to all my music on my ipod in random order. Almost 6,000 songs, though some of the "songs" are lectures, poems, movements of a string quartet, etc... The idea is to prevent myself from buying any new music, to see what stands out particularly. To see what I am not as fond of. So far, Ornette's "Sound Grammar" album has stood out.
Right now the shuffle has brought me Coltrane. This is going to be an excellent sabbatical project. I have listened to about 10% so far. It will be about 23 days of music all told.
Posted by Jonathan at 10:53 a. m. No hay comentarios: 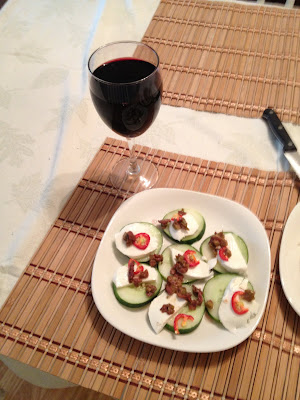